His intellectual curiosity and rigorous thinking are paired with a heightened sensibility for human strife. And all his artworks are witness to this uncompromising commitment to “La Condition Humaine“.

Art Triumph Gallery Beijing is pleased to present “Analogies, Allegories and Metaphors of the Human Condition” the first solo exhibition of represented artist Werner Büttner in China, from June 24 to August 21, 2022.

If Germany had a Literati Culture, the artist Werner Büttner could be considered one of the most prominent proponents. There is hardly any other artist in Germany, who is more well-read than him. Harald Falckenberg, a close friend of Büttner´s, and one of the best collectors of contemporary art there, once said: “If Büttner had not become an artist, he could also have become a famous writer.” The artist´s field of interest is extremely wide. From the myths of early nomadic cultures to the skepticism of Montaigne ´s Essais, the artist has devoured Western philosophy and grand literature, not as an academic, but for personal use and as a means of developing his own personality. The human condition in all its glory and its misery is at the core of his interest and compassion. His intellectual curiosity and rigorous thinking are paired with a heightened sensibility for human strife. And all his artworks are witness to this uncompromising commitment to “La Condition Humaine“.

Looking at Büttner´s paintings at first is a puzzling experience. Many of his paintings are inhabited by strange animals in combination with wondrous ciphers that appear to carry reference to meanings outside of the painting. Take for example “Five Cranes and Charles Darwin´s First Sketch on Evolution“ – Cranes? Actually it were birds, the famous finches from the Galápagos Islands, that Darwin used to explain his theory “On the Origin of Species“. Darwin nowhere writes about cranes, so why are they in the picture? – In 1995 the philosopher Daniel Dennett writes the book “Darwin´s Dangerous Ideas“ in an effort to mediate in the fight between Darwinists and Creationists in the United States. Creationists, he writes, use “skyhooks“ to explain the creation of nature. Darwinists only believe in the survival of the fittest. Dennett uses the analogy of „cranes“ (the technical device, not the bird), a mechanism to lift the species from one level to the next. In his painting Büttner conflates them both back into animals, staring back the the clueless audience, poking fun not only at the apparent idiocy of the ongoing debate in America, as well as wide-spread gullibility – also that of the unwitting audience. He does so using metonymic strategies (exchanging one word/image for a similar one), or metaphors (exchanging one word/image for something else completely). In doing that Büttner is “Attempting to Emblematize Existence“, as an early and important series of paper works are named. 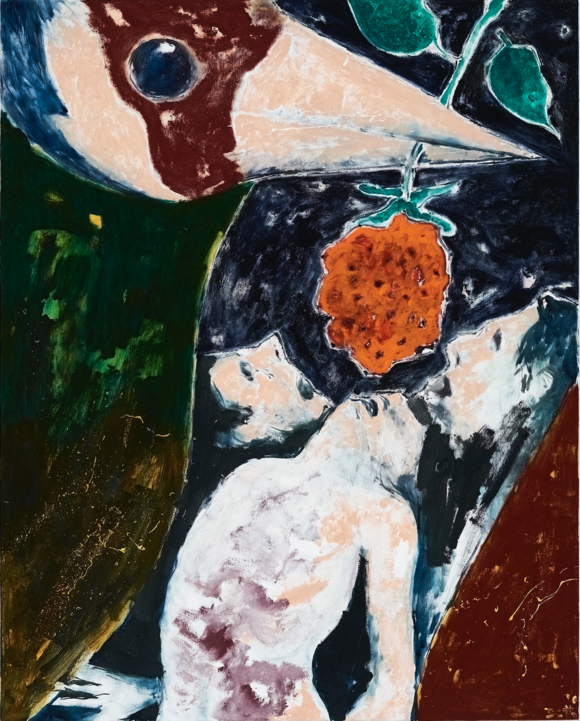 What is an emblem? – “Emblems are based on the conviction that world events are full of discoverable, hidden meanings, and disguised references to meaning, and on the notion of the referential character of everything visible to a higher, inner, principled sense of world order“, as the encyclopedia states. This approach to reality culturally peaked in Western Europe during Baroque times and was based on a broad consensus about the fixed meaning of the emblematic conflation of word and image. 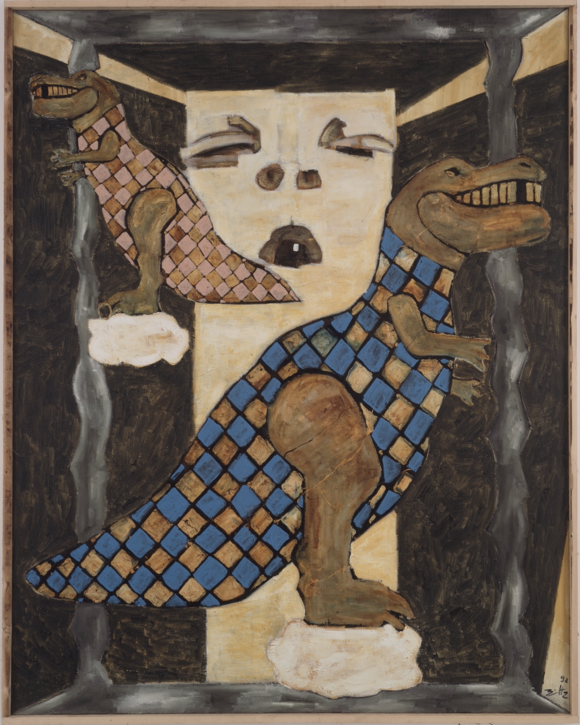 This clearly is not the case today. So why is Büttner using this methodology? – There seem to be two reoccurring traits in his work, deep irony that cautions you to never believe in anything you see, and a deep desire to keep meaning alive, despite its obvious dangers. Werner Büttner is a believer… a believer in nothing. He sees the world and its references as a quarry of sorts, from where he receives the building blocks of his pictorial world and he sees connections where no one else has looked, like in “Thank You France (for Monsieur Monet and Lascaux Cave)“. He also „loans“ images from other artists like Goya, Magritte, or Hieronymus Bosch as evident in “Our Daily Detail“. An interesting painting by Büttner – because it shows, how he invests his attention. This time the big bird really is a finch – an European Goldfinch that holds a bramble over the heads of three minuscule men, trying to eat from it without using their hands. This is a detail from Bosch´s chef-d´oeuvre. What Büttner does not show, are Adam and Eve positioned to the right of the group. With other words, Büttner does not necessarily aim for the “important“ or mainstream topics. He sees with clarity the details right next to everybody else’s focus of attention. In doing so, he reveals much more of our reality than by going at it directly. Irony can save the world.